And we know that in all things God works for the good of those who love him, who have been called according to his purpose. -Romans 8:28

I Tried To Take It Back…

So often I am tempted to get angry, sulk, and take revenge because of a wrong someone has done to me. I run from discomfort, but what if you and I were meant to endure hardships? Never in a thousand years would I have imagined saying the following in a conversation, “Debt repayment and budgeting is not about managing your money, it’s about managing your heart”.

WHAT? I wish I could take those words back, as my wife grinned from ear to ear in acknowledgment of what implications that truly had on our current way of life.  But it was too late.

I didn’t want to admit that despite my laser focus to repay my debt, at the end of the day, it was the process and not the details that carry eternal significance.

Previously, I’d fantasize about receiving checks in the mail that could completely wipe out my debt. Sadly, the check never came; and the truth that I was alone in my debt journey hit me like a ton of bricks.

Before going to college, I saved every penny I had. My relationship with money as a child was not a healthy one–as I didn’t grow up with much. I knew money was needed to purchase things, but I also felt that having too much of it was wrong.

My Thoughts On Money

I think that money is a tool, and it doesn’t have any more power over you than you allow it to have.

Money is NOT inherently evil. The LOVE of money is the root of all evil. -1 Timothy 6:10. Love can be defined as an intense feeling of deep affection.

The emotion of love can influence us to accomplish heroic feats such as this father saving his daughter from a shark attack.
https://www.washingtonpost.com/sports/2019/06/04/paramedic-dad-punched-shark-five-times-save-his-daughter-who-lost-leg-attack/?noredirect=on

This man literally gave a shark the One Punch Man knuckle sandwich lunch special for FREE-99 lol. That shark will think twice before going after anything else besides marine life.

Or this strong fondness of something can destroy your life’s work. Take Bernie Madoff and Jefferey Epstein for instance, both men have been disgraced due to their misuse of things they enjoyed out of context.

Taking things out of the context from which they were meant to be enjoyed is dangerous. For one man, having enough money was never enough; for the other, seeking inappropriate affection.

I would like to leave you with a line from a song from an artist called Bizzle and an update on my student loans below.

Partial Lyrics from song by Bizzle “God Over Money”

If that same resource was made free to you
It would literally destroy what cash means to you
So how you risk your life for a paper dollar?
When as long as you have life you can make a dollar? 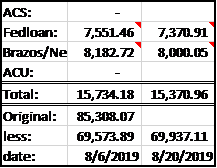 Until next time everyone! Stay strong… fight on… and have no debt but love! Peace and Blessings.